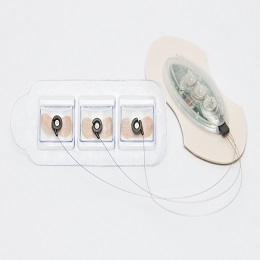 The battery-operated stimulation device AuriStim is affixed underneath the ear. Three needle electrodes are placed in specific areas of the ear in order to stimulate the auricular vagus nerve. For this purpose, the physician searches for a vascular nerve bundle in a vagal innervated area of the auricle and places the needles within close proximity.

After AuriStim has been activated, it transmits electrical impulses every second to the nerves in the ear in a fixed rhythm for a period of 3-5 days. This results in a rhythmic stimulation with alternating three hours of stimulation and three hours of break. By means of this rhythm, a sustainable reduction of pain perception will be made possible. In this way, the patient experiences a continuous, non-pharmacological pain therapy while enjoying full mobility at the same time.

For more detailed technical data and scientific results on the effect of AuriStim, please refer to the instructions for use, the product folder as well as the above-stated literature. In case of any specific questions, please contact us directly.

Only a few working steps are necessary for the application of AuriStim and in the beginning of the therapy.

Before activating the device, locate and mark the three vagal innervated areas in the auricle. After the device has been activated, connect the connected wires with the stimulation needles via a snap connection and affix the AuriStim on the neck of the patient. Insert the needles into the previously marked spots. 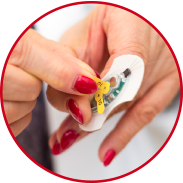 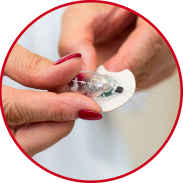 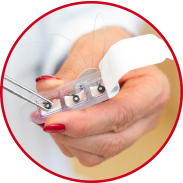 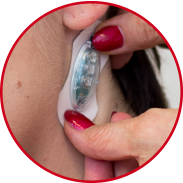 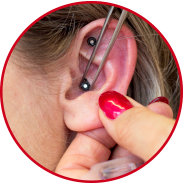 Step 5
Application of the stimulation needles 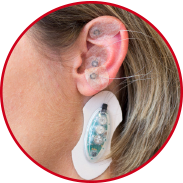 Step 6
Beginning of the therapy

Once the therapy has been started, AuriStim transmits electrical impulses to the nerves in the ear in a fixed rhythm for a period of 3-5 days. Afterwards, the device and the needles will be removed and 2 to 4 days later, a new device can be attached.

The perception of the stimulation varies. However, it is often described as a noticeable tapping. Frequently, the therapeutic effect unfolds immediately, however, in chronic cases a latency of several applications must be taken into account. An application of 6-8 weeks on an average is recommended.