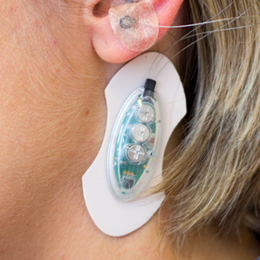 The vagus nerve is one of the central nerves of the autonomic (involuntary) nervous system, which is the system that regulates the internal organs and a wide range of functions, such as heart beat, blood pressure or immune system. Many diseases are caused by a (chronic) disorder of activating and regenerating stimuli in the autonomous nervous system. Should there be any dysregulation, it is reflected in most varying symptoms.

And this is where the electrical stimulation of the auricular vagus nerve with AuriStim intervenes.

The vagus nerve is part of the body’s regeneration system. Its activity increases by means of AuriStim (parasympathetic effect) and thereby initiates a regeneration of the body or dissolution of the aforementioned dysregulation with the aim of a long-term therapy success beyond simply combating symptoms. 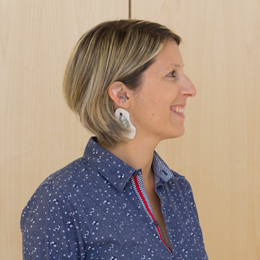 The vagus nerve emits sensory fibres into the ear region. A specific irritation of the auricular fibres with AuriStim and its transmission to the brain thus have a positive effect on misguided regulation processes in the body which are caused by symptoms such as pain, inflammation or circulatory disturbances.

Studies show a sustainable pain relief in chronic and acute pain conditions by modulating pain perception and the release of endogenous opioids (painkillers). In this way, analgesics can be reduced (or discontinued) and the well-being of the patients improves. Furthermore, an anti-inflammatory effect of the stimulation has been established, which is particularly important in chronic diseases.

In addition, the stimulation of the auricular vagus nerve also has a positive effect on the cardiovascular condition via a modulation of the cardiovascular tone as well as on specific neurotransmitters. For example, in patients with peripheral arterial occlusive disease, a substantial improvement of the blood circulation and thus the painless walking distance can be achieved.

The auricular vagus nerve stimulation by means of AuriStim offers you:

therapy in case of chronic and acute pain conditions. Thus, the patients achieve an enhancement in their quality of life while enjoying full mobility with an effect which, based on our experience, continues well beyond the period of application.